Annulment in Alabama is often misunderstood because both religion and popular culture have different views on what annulment means in family law terms.

Annulments and divorces can be similar in that they determine marital status. But the vital difference between them is that divorce ends an existing, valid marriage, whereas annulment simply declares that what everyone thought was a marriage was never actually a marriage at all. In the eyes of the law, an annulled marriage is not valid.

Grounds for Annulment in Alabama

People usually want their marriage to last for the rest of his or her life. You may feel that divorce is the only way to go if this is not possible. Divorce is the most popular way to end a marriage, but an annulment might be a better option if you are eligible. An annulment is only allowed in Alabama for a few situations. An annulment in Alabama does not technically end a marriage but instead declares that the marriage was never established. This means that what appears to have been a marriage is null because of one or more reasons. Find out more about the most common reasons for annulment in Alabama.

Fraudulent relationships are those where one spouse lies about something central to the marriage. If one party claims that they want to be celibate forever after the wedding but has not disclosed it prior to the ceremony, this would be considered fraudulent marriage. Because the relationship's sexual aspect is critical, this is a reason. A second example is if one party reveals that they are only getting married to obtain citizenship, but they do not intend to live together.

The marriage may be annulled in Alabama if it is found that one of the spouses is underage (below 18,) or didn't have parental permission. However, if you were underage when you married your spouse, it may not be valid for annulment.

Alabama law makes incest illegal. Therefore, any marriage between close family members (parents, siblings, etc.) is invalid from the beginning. An incestuous marriage may be annulled regardless of whether you knew about the relationship.

Alabama courts have declared marriage null when it was found that one spouse knowingly concealed an incurable STD before the marriage. Although this is not always possible, it is possible to annul a marriage if the STD is found very soon after the wedding.

It is illegal to force someone to marry if they are forced by one party or another. Coercion may be expressed in the form or threats of violence, psychological abuse, and other forms of force. To be eligible for an annulment, you must be able to prove that you entered into the marriage under coercion.

A marriage between a married couple is not allowed. Any attempt to make another marriage would be invalid. You can apply for an annulment if you find out that your presumed spouse was in a valid marriage.

How do I get an annulment in Alabama?

Alabama courts have the power to annul an Alabama marriage, also known as "subject matter jurisdiction". This is even though neither spouse is a resident in Alabama at the time that the annulment is filed. An annulment in Alabama is corrective ("equitable") in its nature. The theory behind an annulment is that the marriage records should be changed to reflect the truth. An annulment may be granted even if one spouse has died.

If you are seeking an annulment in Alabama, it is important that you file all the necessary paperwork. If you make an error and file divorce papers, it is acknowledging that the marriage is valid and that a divorce is required. You should submit annulment paperwork to the court, as these papers will make it clear that the marriage was not valid.

You will need to file a Verified Annulment Complaint in Alabama if you want to obtain an annulment. For more information, consult an experienced lawyer.

Benefits of filing annulment in Alabama over divorce

1. Annulment is a much faster process than divorce. In many cases, annulment can be completed in as little as 45 days.

2. There is no waiting period for an annulment in Alabama. You can file immediately and be divorced within weeks.

3. Annulment is less expensive than divorce. In most cases, you will only have to pay the court filing fee.

4. Annulment does not require you to prove that your spouse was at fault. This can be a difficult and costly process in a divorce.

6. You do not have to be a resident of Alabama to get an annulment. You can file for an annulment if you live in another state or country.

7. Annulment is a good option if you have religious objections to divorce.

8. Annulment is a good option if you want to remarry quickly.

9. Annulment will not affect your credit rating.

10. You can get an annulment even if your spouse does not want one. The court can grant an annulment if you meet the requirements.

Drawbacks of filing annulment in Alabama over divorce

1. Annulment is more expensive than divorce

2. Annulment is a long and complicated process

3. You must have a valid reason for annulment

4. Annulment does not erase your marital history

5. You must meet certain residency requirements to file for annulment

Difference between annulment and divorce in Alabama

Waiting period for filing an annulment?

Can you apply for annulment in Alabama if you have children?

Yes, you can apply for annulment in Alabama if you have children. You will need to provide the court with evidence that your marriage is irretrievably broken and that you have made a good faith effort to reconcile. You will also need to prove that you have parental rights and that it is in the best interests of your child for the annulment to be granted. The court will consider the following factors when making its decision:

-the length of time the child has lived in a stable, satisfactory environment and the desirability of maintaining continuity;

-the depth of the child's relationship with his or her parents, siblings, and other significant adults, including grandparents;

-the child's adjustment to home, school, and community;

-the mental and physical health of all individuals involved;

-which parent is more likely to allow the child frequent and continuing contact with the other parent;

-whether one parent has demonstrated an unwillingness to co-parent or cooperate in matters concerning the child;

-past or present abuse by one parent or any other individual seeking custody against a child or another family member; and

-any other factor the court deems relevant.

Can i file for annulment if my spouse does not live in Alabama?

People worry that their paternity will be questioned if the marriage is annulled. Technically, this is true. An annulment in Alabama states that the marriage was never actually consummated. This makes the children of the "marriage" illegitimate. However, the annulment court has the power to determine paternity, enter support orders and make custody orders. This distinction is not very practical.

Alabama law provides that there is a "presumption" of paternity if a father or mother are married and the child is born during the marriage. This is because there is a strong legal assumption the ex-husband is the father of the child. The husband will need to present convincing evidence (very persuasive proof), to prove this to the judge. It can be very difficult for either parent, even if there is a presumption that the father is the father, to obtain a court order that allows genetic testing of both father and child.

During annulment in Alabama the law also provides that paternity is presumed if the father receives an underage child into the home and treats the child as his biological child.

Alabama law states that unmarried children have the same legal rights and protections as those born to married parents. This means that children born to a couple whose marriage has been annulled are entitled to child support and visitation time with both parents, if visitation is in the child's best interests. The Alabama court that hears the annulment case will make sure to determine parentage and enter custody and child support orders.

However, because the marriage is legally viewed as never having been valid, an Alabama court can't award permanent alimony (spousal support) to either party. However, the judge may be able to grant temporary alimony or attorney fees to allow the spouse with less income to continue litigation.

It is somewhat unclear whether Alabama's courts can divide property (including assets and debts) in an annulment proceeding. Some court decisions indicate that at most a partial division can be achieved, but they are not binding precedent and are not to be followed by other courts. According to the majority, an annulled marriage doesn't create a binding property division. Also, there is no "surviving spouse" for insurance purposes.

Do you need an attorney to file an annulment in Alabama?

No, an attorney is not necessarily required to file an annulment in Alabama. However, it may be advisable to speak with an attorney to discuss your specific situation and the options available to you. 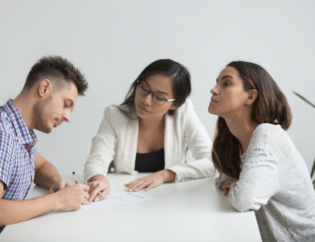